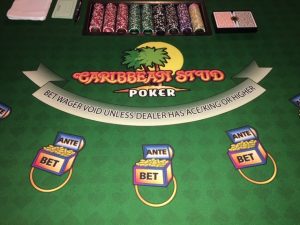 Caribbean Stud Poker is a lot of fun to play, but just a word of warning...it is not a great money maker, with a house edge of over 5% even if played optimally.  So don't look to raid the casino's coffers playing this game.
The rules of the game are pretty simple...

If dealer's hand wins, the player loses both the ante and raise

If the player's hand wins, the player wins even money on the ante, and gets odds on the additional wager according to the following payoff table:

Caribbean Stud Strategy
As we noted above this is not a great returning game, with a house edge of just over 5% even if played optimally.  So if you are looking to win big at the casino, this perhaps isn't your best game choice.  But still, it is lots of fun, and to play it optimally is really easy.

While this won't make you a long-term winner, it will help slow your losses. It's the paying hands, a pair or better, that will net you the good wins. Trouble is that the dealer must qualify (A-K) in order for you to get the real payoffs and this only 54% of the time.  This means that 46% of the time you'll only get paid for your Ante bet at 1-1 no matter how good your cards are.