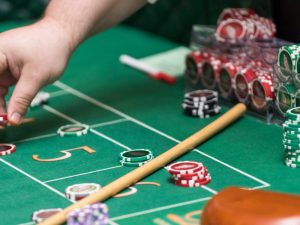 Craps is played with two dice on a special table and players bet on the outcome of the numbers thrown.  The player throwing the dice is known as the shooter.  Other players may place their gambling chips on the table's layout and win or lose according to the numbers thrown by the shooter.  There are a number of betting spaces on the table's layout but if you're new to the game, don't worry, you don't have to know all of them.

The shooter throws the dice. This initial throw is known as the come out throw.

If he throws a total of 7 or 11 he immediately wins. This is known as a natural.

If he throws a total of 2, 3 or 12 he immediately loses. This is known as craps.

Any other total thrown is known as the player's point and he continues to throw the dice until he either throws his point again or he throws a 7.

So if you place your chips on the Pass Line betting space before the come out roll you win with a 7 or 11 on the come out throw or if the shooter makes his point.  The house edge against you on this bet is 1.414%.  Not bad odds in a casino.

The Pass bet is the most commonly used bet on the table and is played by just about everybody.  You could play this bet frequently and blend in with the play.

You don't have to bet with the shooter you could bet against the dice passing.  The Don't Passbetting space allows for this and you will have a house edge of 1.402%

Note on the layout that the Don't Pass bet bars 6-6. This is because betting against the shooter would give a player the edge. Remember the odds of winning are slightly against the shooter. Bar 6-6 means that should the shooter throw a 6-6 the Don't Pass bet is undecided. It neither wins or loses and the player who made the bet may withdraw it or leave it to be decided by subsequent throws. Some tables bar 1-1 instead. There are greedy casinos who will bar a 1-2 . There are two ways to make this (1-2 and 2-1) and this doesn't double the percentage, it more than triples the house edge. Barring gives the casino or House the edge on Don't Pass/Don't Come bets. The casino's edge on a table that bars 1-2 is 4.40%.

Once a natural, craps, a seven, or the point is thrown a new round is played, as before, beginning with a new come out throw.

If the shooter sevens out the dice pass to the next player who becomes the new shooter.