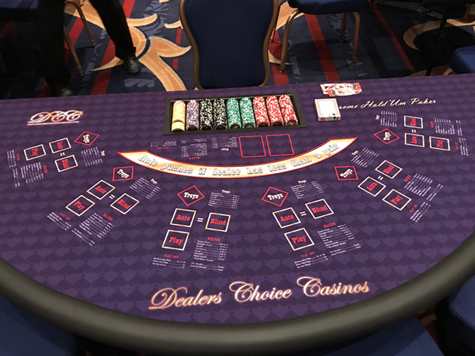 The format of Ultimate Texas Hold ‘Em is similar to regular Texas Hold’em except players are playing against the house, not each other.

Play starts with the player making an Ante and Blind bet (and any other side bets that they choose to make). The player and the dealer are then dealt two cards each and five cards are placed in the community portion of the table. The players are then be allowed to look at their cards and decide if they wish to check or raise three or four times the ante. If the player decides to raise at any point during the hand, the action will end from the players end.

After deciding to check or raise, the player’s will be shown three cards which are referred to as the “flop”. The other players who did not raise before the flop will be given the choice to check or raise twice the ante. After the table has resolved the post-flop betting, the last two cards will be revealed.

By this time, the players will be required to either match their ante or fold. After this, the dealer will reveal his two cards and grade the hand. In order for the dealer to qualify, he must possess at least a paired board.

If the dealer does not qualify the ante pushes. The same is true even in a scenario where the player possesses a hand that loses to the dealer. Despite the dealer’s disqualification, the raises and the blind will still remain in play.

If the dealer qualifies, the highest five card hand wins the ante bet.

Ties push both the raise and the blind bet.

A fun feature of Ultimate Texas Hold’em is the player’s side bets win whether or not the dealer qualifies for the hand or the player’s hand loses to the dealer.