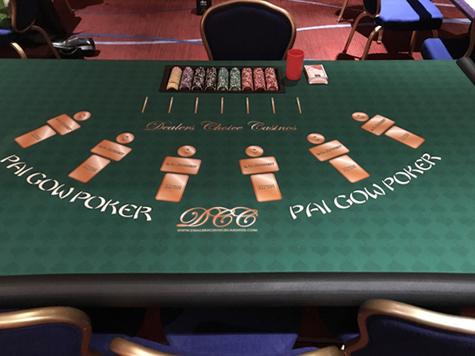 This is a casino gambling game based on the Chinese Domino game Pai Gow but played with poker combinations. It can be played by up to seven players.

A deck of cards plus one joker is used. The joker is a wild card which can be used only as an ace, or to complete a straight, a flush or a straight flush.

Seven cards are dealt to each player. All players other than the dealer look at their cards and divide them to form two hands - a two card hand and a five card hand. The relative values of the five card hands are the same as in poker, with one exception: A-2-3-4-5 is the second highest type of straight or straight flush, ranking between A-K-Q-J-10 and K-Q-J-10-9. Five aces is the highest hand, beating a straight flush. For the two card hand, any pair beats any two unmatched cards, but no other combinations are possible.

The players place their two hands face down, and when all are ready, the dealer's seven cards are exposed. The other players may not touch their cards from this point on. The dealer forms the seven exposed cards into a five and a two in the same way as the players.

Note on the deal
When this game is played formally, a rather elaborate method of dealing is used. Seven hands of seven cards are dealt, one card at a time, and the remaining four cards are discarded unseen. The dealer then throws three dice and counts around the players at the table counter-clockwise, starting with himself, up to the dice total to determine who gets the first hand which was dealt. The following hands go to the other players, in counter-clockwise rotation.

Dealer's advantage
The dealer obviously has an advantage (winning tied hands), so if you want the game to be fair everyone has to deal an equal number of times during the session.